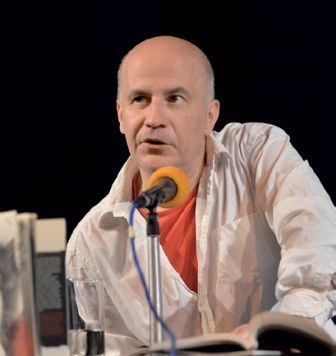 Denis Peričić was born in 1968 in Varaždin. He is an awarded Croatian poet, prose and play writer, SF expert, translator, essayist, columnist, critic, anthologist, media expert, journalist and publicist, editor and publisher. His work is included in 10 anthologies and translated to English, German, Spanish, Polish and Macedonian. He was a member of expert committees of numerous literary manifestations. He is the author of about 50 scientific and professional papers. He is a Croatian language and literature professor, Yugoslavian philology professor and holds PhD in Literature from Faculty of Humanities and Social Sciences. He continued his studies in Vienna, Budapest and London (creative writing, telecommunication, psychoanalysis, gender studies, literature, and visual arts).
He is the president of Čakovec-Varaždin’s Croatian Writers Society, member of HZSU, Matica hrvatska and other associations. He was editor in Vijenac and participated in few hundreds of literary tribunes, both as organizer and participant. He wrote more than 20 books, edited Miroslav Krleža’s book Provokativne misli (Provocative Thoughts), and translated from English following authors: Nick Cave, Quentin Tarantino, Algernon Charles Swinburne, Krist Novoselic, Charles Webb and the biography of Edgar Allan Poe by Peter Ackroyd. He published the translation of Kurt Cobain’s note, his own CD and he collaborated with Nick Cave.
Denis Peričić worked as a journalist-editor, public official, translator, manager of public relations and marketing director. Since 2012 he has been working as a freelance artist. He was awarded with about 50 different literary awards.